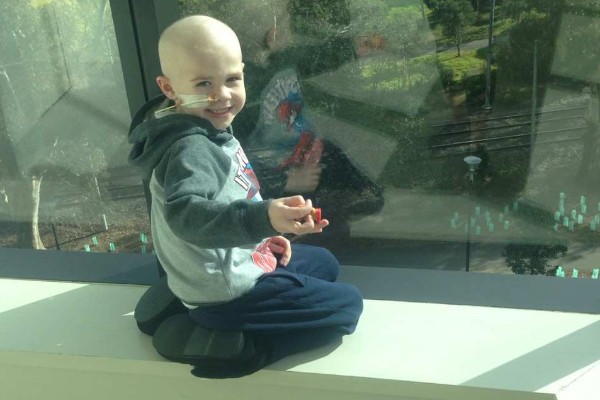 William Smith is a four year old boy going through the fight for his life.

The 15th May 2017 will forever be a day those close to him will remember.  William was seemingly healthy climbing trees (as four year old boys do) at the Enchanted Maze in Rosebud the day before his world changed after going for an ultrasound and being diagnosed with Wilms’ Tumor Stage 5.  A common cancer for kids but more of that later.

William is the youngest child of the close nit Smith family.  Mother Monique, Father Kye and eight year old brother Cameron stay strong behind William through each difficult day he faces.  Monique is a long standing nurse for RDNS, looking after others who require her assistance day in, day out.

Outside of work Monique is always willing to support others in the community from looking after other kids on her days off work to being involved and supporting school events.  It’s rare to find a situation when Monique hasn’t helped a person in need.

Kye is a devoted father to his 2 boys who is tied to the commitments of running his own carpentering business  that is currently in its start up phase requiring his time and effort especially with the financial burden that comes with any cancer treatment.  Following in Monique’s footsteps, Kye helps out where he can within the Melton Community especially when it involves either William or Cameron.

Neither Monique nor Kye have had what you would call smooth rides in life but through sheer determination they’ve really bonded as a family and taken the positive out of everything they do.

As expected and understandingly so, Monique and Kye have struggled with the unfortunate news of William’s ill health and despite this, are still willing to help others in need when required.  It’s this willingness to help that I hope can be returned to Monique and Kye in their time of need.  Monique and Kye have not asked for any assistance because they are too proud to request the support of others themselves.  They need to understand that it has nothing to do with being proud, it’s about keeping William with us and giving him the best treatment we can.

Now the reason why we are here.

William’s diagnosis since day one has been short on positive news.  Wilm’s Tumor Stage 5 has impacted William’s left and right kidneys, then spread to his lungs.  William had to undergo 6 weeks of intense Chemotherapy to reduce the size of the tumors in his kidneys to an operate able state.  William’s surgery was performed on the 4th of July 2017 where all of his left kidney and ½ of his right kidney was removed with limited functionality and with the need for dialysis and transplant in the near future.

Unfortunately, during surgery doctors discovered that the left kidney had 12 tumors in it which has been subsequently examined revealing a poor histology for the cancer William has.  For those who aren’t familiar with the term ‘histology’ (which I was one), this involves an examination of the tumors usually post removal to determine the type of tumor, how it develops and how it might continue to grow in the future.  The histology of William’s tumor has been determined by doctors as the worst possible outcome.  They believe the tumor, despite removal will return and could possibly return with double the strength.

To be clear, William has not been diagnosed as terminal but he is in the fight for his life.  Doctors have recommended (commencing mid July 2017) 40 weeks of triple strength Chemotherapy and Radiotherapy to combat the return and containment of William’s Wilms tumor.  This could be the first of many long treatment periods that will stretch William’s resilience and test his Will to live.  We need to remember, William is only four years old with his whole life ahead of him.  A four year old shouldn’t have to live through or understand this pain.

Over the next 40 weeks or longer, the Smith family will be bouncing between the hospital, home and work to try and give William the best chance he has at survival while still giving Cameron the chance at a normal life.  With the support of ALL, we could make this fight one to remember.

Funds raised will be used to support the financial burden of going through long term cancer treatments.
From medical bills, hospital stays, parking tariffs and time off work to comfort an ill child, this is the support you are giving.  You are making a major contribution to William’s fight.

With doctors finalising William’s treatment options including consultation with European and US specialists on alternative treatments, the future approach to getting William healthy is still being debated.  What we do accept is that there isn’t a short term solution to this problem and any support to the family is greatly appreciated.

Something to think about – If you have kids of your own or young relatives who were sick, how much would you appreciate a helping hand by a complete stranger?

How can you help this family, this boy?

By donating yourself, sharing William’s fight page with others or even telling your friends in person, you’re helping.  William’s story alone is enough for most Mothers and Fathers to relate to whether they’ve been up close and personal with cancer or not.

Whether you know William, Monique, Kye, Cameron or not, it’s time to return the support that they’ve given to so many over their lifetime.

Save our NSW farmers from drought
Scroll to top