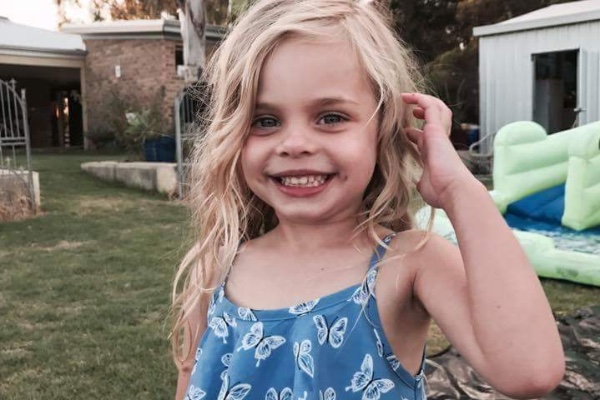 At age two Isla become very sick .. Over a period of a week she stop eating was constantly lying with the head on the ground and eventually stopped drinking.. Taken to hospital with a suspected UTI we were admitted for a week …Isla continued to be unwell, she was emotional, weak and tests were all coming back clear… On evening Rounds a doctor was doing the rounds with a JR Doctor and Isla was lying under the hospital chair with her head on the ground… After being told yet again they couldn’t find anything the doctor asked what she was doing on the floor?? I told him this what she has been doing for two weeks now.. I have mentioned it every time she is checked by a hospital staff memeber… The Jnr doctor went off and after hours of trolling the internet found an article about cats and dogs that put their heads on the ground when they suffer Neurological problems…

The Doctors came in that night cleared her hospital room and my heart and world were shattered… They had found “something ” on her brain…,

My husband and I drove her to PMH in the middle of the night … After A week in PMH and Isla black and blue from testing… We were told she has an abdominal mass or brain tissue… We were sent home …. That was in 2.5 years ago

She has been to PMH consistently every three months…. Having more and more tests…. Isla has finally been diagnosed as having focal seizures due to the effected brain matter… How ever her seizures have gone from only now and then to multiple seizures every day and they have since increased in saverity to the point of her becoming in continent, limp and not breathing…. She is tired most days and still has day sleeps …,

Their is little to no chance of medication helping her due to her condition ….. but still we try..,,

Isla has just been approved for a seizure alert Service dog Through Smart Pups Australia at the cost of $20,000… This dog would change Islas life…. She could sleep in her own room and would not continually share a single bed with her older sister …. She could go to school and staff would have comfort as would Isla and her family… She could take a bath and swim in a pool with out me being a nervous wreck at the end of it..,,

It will take 18 months for her dog to be trained once we have raised the necessary funds….

Any donation would be greatly appreciated….,, If we are lucky enough to raise more than required we will donate the rest to Smart Pups Australia So they can help another child in need…. As they only train service dogs for children