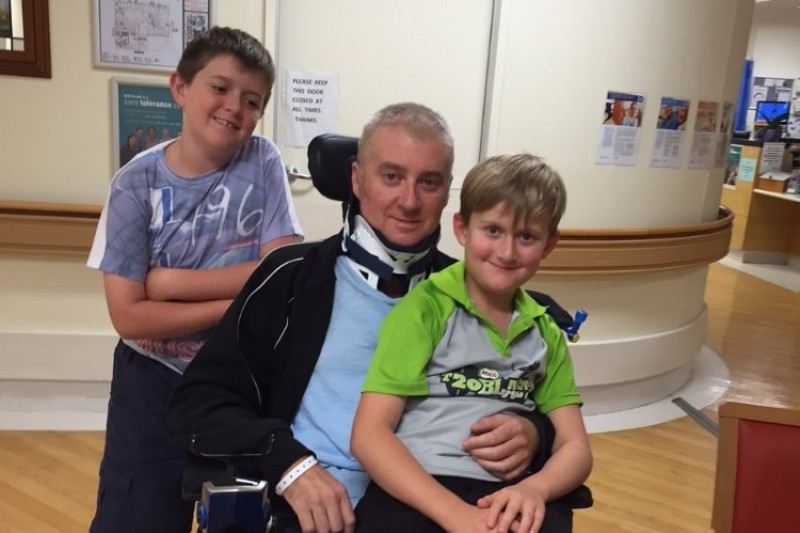 Mick Higgins is a 46 year old bloke married to a great girl, Leonie and has two champion boys, Jim 11 and Lachlan (Lachie) 9. Mick is originally off the land from halfway between Forbes and Condobolin, NSW and now lives in Canberra with his family.

Mick was as fit as a fiddle through his efforts at cross fit, as you can see in the photos, and chasing after his two boys.

On the 12th of April, 2016 Mick was going about his day job as per usual when a freak car accident occurred and in a matter of moments the Higgins family world was turned upside down forever. The outcome of Mick’s accident has left him with what is known in medical terms as C5 Asia A incomplete paraplegic.

People who know Mick describe him as an old fashioned, country bloke who has worked hard for everything he has in life.

However, the challenges now faced by him and his family due to his condition are many. What most of us take for granted and normal are no longer an option for Mick and the family. Some of which are the financial hurdles now presenting themselves.

It is in this space that we hope to reach out to family, friends, colleagues and the general public in supporting the Higgins family as much as possible. The support shown already and the groundswell of activity has been unbelievable from Mick’s community.

We hope to build on this and work towards ensuring we can provide an environment for Mick, Leonie, Jim and Lachie to thrive in as family.

As you can imagine there is so much that needs to be covered now that Mick will be in a wheelchair for the rest of his life. From the house, to transport, to schooling naming only a few.

Thanks in advance for your support, whether it be putting out good vibes or donating to the fund. The family appreciate it.

Thank you from the Higgins Family.

Its Our Turn To Support Our Coach
Scroll to top