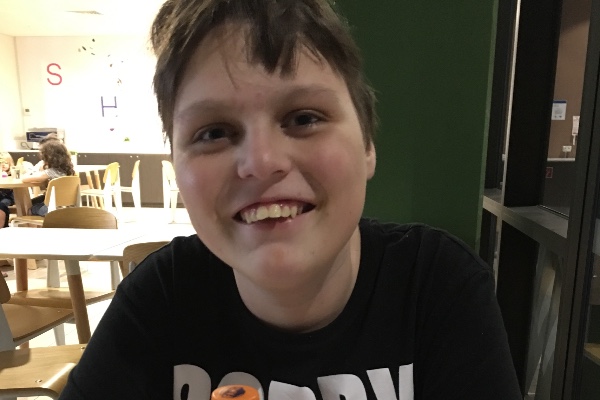 Hi, I was hoping that you guys would be able to help us raise some money for my little cousin who has now been in hospital for 2 months very sick. Seth was born with a heart condition and is now having severe side effects and conditions relating to that. He still has a long way to go to fully recover. The future is very uncertain, he may need a heart transplant in the future, but we are not at that point yet. Here is his story. Seth has was born with Hypoplastic Left Heart syndrome, which means he has half a functioning heart. He had his first open heart surgery at 6 days old, he is 15 now, and has had 6 others since, as well as many other procedures. Five years ago he was diagnosed with Protein Losing Enteropathy or PLE also but they managed to put it into remission. Almost two months ago, on September 8th, my cousin Chantele (Seth’ Mother) took Seth to the ER because she suspected he had some heart failure caused by him struggling to fight a viral infection. He was admitted for observation however less then 24 hours later they were told they believed it wasn’t a viral infection but that it was Protein Losing Enteropathy or PLE that had returned and that they would need to be flown to Brisbane.On September 12th they arrived at the Lady Cilento Childrens Hospital for treatment and to await Seth’s cardiac catheter on the 19th. It was there that it was discovered that Seth’s mechanical tricuspid valve wasn’t working properly, one flap was sealed shut with a clot. It was decided to reverse the effects of the warfarin Seth was taking and to try a medication called TPA to see if they could dissolve the clot. The first round of it failed, the second was stopped after four hours because Seth was having trouble with his eye, within minutes he could no longer see with his right eye. The damage is permanent, his retina has been damaged and he will be partially blind for the rest of his life. Failing the TPA Seth then had to have open heart surgery on September 22nd, five days before his birthday. After a long 8 hours Seth was moved to PICU to begin his recovery, the surgery to replace his valve had gone well. The surgical recovery this time was difficult with a lot of setbacks but always the champion, he got through however the PLE had not gone into remission. The medication they needed to give him was delayed as Seth had some issues with tachycardia, but was started two weeks ago. So far there hasn’t been a very big change, if any, Seth’s still requiring albumin transfusions and assistance with diuretics to keep the fluid from building up. Yesterday on October 31st Seth had a PIC line put in, we are hoping this will be a big help in his recovery and the months of treatment ahead.They have been in Brisbane for seven weeks and still no end in sight. There was hopes Seth could be transferred back to Mackay Base Hospital but as yet is still too complex for them. It’s been hard for my cousin, Chantele as she has been down in Brisbane alone with Seth, and her five other kids are still in Mackay, being cared for by my nan. She has been trying to find a way to bring her 2 year old daughter to her, but flights are so expensive and it’s already hard. Asking for help is one of the hardest things for her and myself to do but it’s getting tough down here for her which is why we are trying Go Fund Me. To raise a little to help with being able to fly her daughter down to her, with one of my family members or that she might be able to make a day trip to fly home and get her, her other boys are all in school but It would be great to be able to bring them down to see Seth, even just for a weekend! To help with getting Seth out, he’s allowed to go out for a few hours during the day. Help for the small things like the bills and groceries here and back home and also medical supplies for Seth, like coagustrips. Any help is so greatly appreciated as we continue through this part of our journey and hope that soon Seth is well again and they can go home, it’s tough being separated from your family, hopefully it won’t be much longer.